While the news on climate action at the federal level seems rather disappointing, a number of states are taking some notable steps. This morning's google alert highlighted steps taken in Vermont, New York, and Maryland: 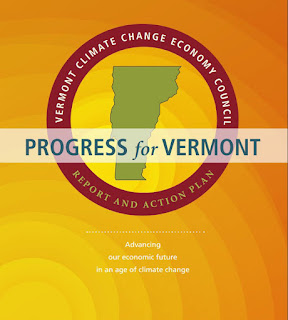 Hundreds of people gathered in Randolph, Vermont Monday to discuss the state’s “climate economy.” Attendees considered how to advance the state’s economy in the midst of climate change. About a year ago, the Vermont Council on Rural Development formed the Vermont Climate Change Economy Council which recently completed an action plan: Progress for Vermont: Report and Action Plan of the VT Climate Change Economy Council. (reported by WAMC, Northeast Public Radio)
Meanwhile, "Vermont Gov. Peter Shumlin made an appeal on Tuesday to the board that oversees the state’s public retirement funds to shed investments in coal companies and the oil giant Exxon Mobil in an effort to combat climate change." (reported by Washington Times)
New York and Maryland also explored actions against Exxon...
New York state's comptroller and four other Exxon Mobil (XOM.N) shareholders asked the U.S. Securities and Exchange Commission this week to force the oil producer to include a climate change resolution in its annual shareholder proxy, according to a filing seen by Reuters. (reported by Reuters)
In response to a petition calling for an investigation of ExxonMobil, Maryland Attorney General Brian E. Frosh said his office will "hold accountable any individuals and corporations who have intentionally contributed" to climate change. (reported by InsideClimate News)
Maybe bottom-up leadership can be a more powerful change agent?
Posted by Elizabeth at 3:31 AM No comments:

Now and then I squeeze a tiny bit of time to learn more about a conservation topic. This post is basically my notes on the topic. Any errors or misunderstandings are my own and not attributable to my sources.

Through my work with the Northeast Fish and Wildlife Diversity Technical Committee, I've had an opportunity to learn more about the disease affecting bats throughout the eastern U.S. One of the best places to go to learn more about the disease is whitenosesyndrome.org - a website dedicated to reporting the latest information as researchers and agency scientists work together to respond to this devastating bat disease.

The disease is caused by a fungus, Pseudogymnoascus destructans. Affected bats show a white fungus on their noses. The disease seems to kill bats by causing them to arouse too often during hibernation - expending too much energy and leaving them drained when they come out of hibernation in spring.


White nose syndrome was first observed in New York in the winter of 2006-2007. The disease spread radially from there over the last 9 years and confirmed cases of bats with white nose syndrome have been found in 31 states. Four more states have confirmed the fungus Pseudogymonoascus destructans.

Seven species of bat in North America have been identified with symptoms of White Nose Syndrome:


Each species is impacted by the disease to differing degrees and in different ways based on their particular hibernation conditions (temperature, seasonal duration) and other factors - some species, like tri-colored bat, are experiencing high mortality.

Population declines have been so severe that concern for the affected species is very high. Gray bat and Indiana bat have been federally listed as endangered, and northern long-eared bat is now listed threatened. In the Northeast, little brown bat, eastern small-footed bat, northern long-eared bat, and tri-colored bat are listed as Species of Greatest Conservation Need in all 14 states' Wildlife Action Plans.


Treatments that are effective at eliminating Pseudogymnoascus destructans both on cave walls and on bats' noses have been developed. However, treatment of caves could eliminate many other native fungii with potentially disastrous unintended consequences, and bats could carry the fungus back to the cave every year. Treatment of individual bats is only practical on a small scale - and they could be reinfected every winter. At this time there is no feasible way to prevent this disease in wild populations.

As with any wildlife disease, natural biological responses can eventually control the impact. Bats could adapt to the fungus or other species (plant or animal) could control Pseudogymnoascus destructans through competition or other means. The best stewardship actions humans can provide are not disturbing hibernating bats, not spreading the fungus through our own visits to caves (read about decontamination protocols), and reducing any other stresses on bats - the healthier each individual is, the more likely they would survive a hibernation with white nose.

Posted by Elizabeth at 2:26 AM No comments: 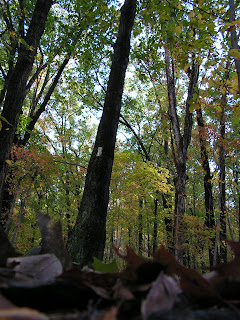 A few years ago it was my pleasure to serve on the Appalachian Trail Conservancy's (ATC's) Stewardship Council.

The A.T. is one of the longest continuously marked footpaths in the world. It was completed in 1937, and has been a National Park since 1968. The trail runs roughly 2,190 miles from Georgia to Maine, through public and private lands with a wide range of land uses and management goals. You can't draw a line that long anywhere in the U.S. without having hundreds of highways, pipelines, power lines, rail lines, you-name-it crossing the line. And yet, people take pilgrimages to follow these white blazes on a quest for a deeply moving wilderness experience.

The ATC and the A.T. office of the National Park Service work everyday to preserve that experience for people spending a day walking in the woods or six months living in nature. 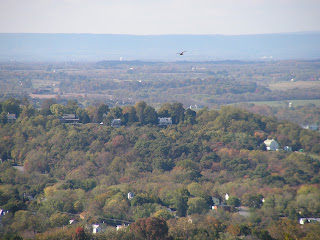 To address these external threats, the ATC and A.T. National Park Office launched the "Appalachian Trail Landscape Conservation Initiative". This is a collaborative effort to bring together willing and interested public and private land managers, local communities, landowners, and a wide range of partners to promote and conserve ecological, cultural, historic, and economic values across a large landscape centered on the A.T.

The success of this initiative hinges on scaling up the personal passion derived from the awe-inspiring experience of hiking this iconic wilderness and converting it into a commitment to set some tracts of lands aside... to say that we don't need to use it all, we can let some of it just be.

If you know someone that has the money or land or influence to assist A.T. managers in their quest to preserve the surroundings of the A.T., please contact Dennis Shaffer, Director of Landscape Conservation, ATC, (802) 552-4738. 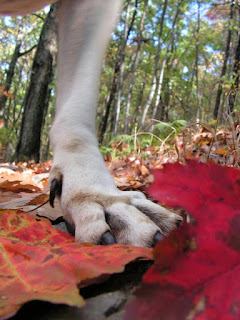 Posted by Elizabeth at 2:07 PM No comments:

Elizabeth
I'm a mom, a scientist, and a musician. I like hiking, biking, gardening, and yoga.